Dipoli, the Helsinki University of Technology Student Union building, is an integral part of the Otaniemi campus implemented on the basis of the master plan by Alvar Aalto. An open architectural competition was held for the design of the building in 1961 and a second stage competition between the two best proposals was held the following year. The building was financed largely through private donations.

The Pietiläs attempted to diffuse the large building mass within the surrounding nature by using abstracted natural forms, large window walls, natural materials and a green-brown colour scheme. Each facade segment has a different composition, and the outer walls strongly meander both vertically and horizontally. The main materials are fair-faced concrete, copper and wood panelling, and natural stone boulders. In front of the southern entrance is the acoustic-kinetic sculpture Käpy (Cone) built in 1968 by the artist Reijo Perko and his work team.

Dipoli consists of two parts, each with a different character: a free-form part containing the main public spaces and the lower rectangular part containing some of the more prosaic functions. In the middle is a hall-like institutional kitchen, around which are meeting, festival and restaurant spaces in different sizes. Movable partitions and sliding doors allow for the combination of spaces to form different units. The spaces along the outer perimeter overlook the surrounding environment via wood-framed window-walls. The spaces in the centre of the building receive natural light through rooflights, skylights, lightwells and internal windows. The primary materials of the interior are fair-faced concrete, stained wood panelling and natural stone boulders. The Pietiläs specially designed for the building a large amount of the furniture, lighting fixtures and other details.

The unique architecture of Dipoli attracted a lot of attention on its completion, both at home and abroad, but also encountered a lot of criticism. The building was used as a Student Union building until 1981, after which it has functioned as a congress and training centre. The facades and main spaces have been preserved quite well in their original state. However, some of the wood-framed windows have been renewed and the foyers have been divided by partitions into smaller spaces. In addition, the interior surface materials have been extensively changed and the major part of the original furniture has disappeared. Dipoli was renovated for use by Aalto University in 2015-17. 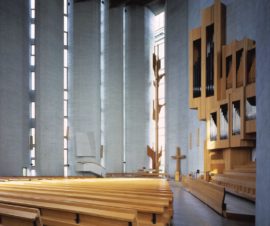